As an entertainer and producer I am very aware that it takes a variety of ideas and creative thinking to produce anything. The first rule of thumb that any producer ask himself is ..”who is my target audience”? When that question is answered then it makes it easier to produce your event.

The 2013 MTV awards is an annual event that is primarily a business generating, money-making  event for MTV and its affiliates. The TARGET audience that makes up the MTV generation  is the youth aged from 12-24 years. Remember that MTV is a cable and satellite television channel that broadcasts popular music and promotional music videos. It was launched in 1981. So one would ask why should they be concerned with anything that might be considered ‘old’ or out of their target audience current trends? Some will say their target audience is the youthful, try anything, do anything, wear my pants on my ass, tattoo covered ,a piercing body, colored hair, booty and cuchie showing generation . MTV is giving that audience the staple they have given them all year – filth. Whatever you feed the people little by little , they become. For those MTV generation who knows better, they might be appalled, like Will Smith kids reaction to the performances. But for others it is ..”yea…This is THE BOMB”… sadly expressing their delight at the gourmet of pop culture gone south.

Will Smith & Kids at MTV last night looks like they saw a ghost!

Every year MTV gives its audience , totaling millions worldwide, “Shock & Awe”. It doesn’t matter about the clever editing used, filth usually filters through. This year the show was held in Brooklyn. Why Not? It’s the coolest place  since Vegas. A whole NBA Team moved there!  Nicely tucked between Brooklyn Bridge, the Barclay Center was the home for the filth that started from the so-called must have staple of awards show the Red Carpet!  The only thing exciting about that “carpet” show was the shot above from the overhead blimp. That experience was just a lot of howling screaming kids and the shallowest ‘personalities’ that they could find to interview . 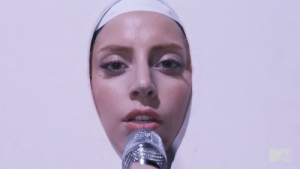 Lady Gaga opened the show. She has a new single so it’s a done deal. In the usual Lady Gaga shock and awe style she delivered. From audible boos to the eventual hand clapping her reaction was at best luke warm. This audience was tough if they can’t  appreciate Gaga.

The next shock was the duo featuring  the current “thief of rhythm” Robin Thicke and the media popular Mylie Cyrus.  That performance made Janet Jackson’s “NIPPLEGATE” looks like a sunday school performance. Everyone’s talking about it. umm WHY? The hypocrisy is killing me. Everybody ‘twerks’ in the MTV generation. It’s a standard acceptable “dance style ” for the ‘ladies’ and Mylie is only doing what she knows the kids love to do. So don’t blame Mylie. It’s on MTV DAILY!

The show moved from the MTV awards to the Justin Timberlake concert , complete with a reunion of NSYNC, how touching. He  was receiving the coveted Michael Jackson Award. His performance was actually a competition between his dancers and Gaga’s dancers to see who were the best performers and whose choreography was outstanding  The same boring , overly produced pop numbers for 20 minutes from someone who is at best a mild performer. All I expected to see was Mrs. Carter  appear and shake her “boo-die” that only Mrs Carter can.  At that point I went to bed.

Some 2 hours later I awoke and the show was airing again from 10.30pm – 12. I decided to watch the balance as I had recouped some strength to endure the MTV filth. The usual staple , Kanye aka “Father of cute little North West “ performed. Somehow his contract with MTV is indefinite and as usual he lost me for the  3 minutes he was on stage. As a matter of fact – he lost the entire audience and only Kanye knows his message he wanted to spread last night. Thankfully he did not slap anyone for their awards.

The filth continued. Drake looking like a child high on coke to the over exposed Kevin Hart . But the most humorous segment of the night was the producer’s ode to ‘equality’ with the appearance of out and about athlete Jason Collins and the current & popular ASAP Rocky to deliver the message of inclusion to the audience. I must admit that was good comic relief in an otherwise boring show.  On stage were 2 peas, not in the same pod, delivering a message that one pea LIVES and the other FORCED to ‘promote’ a topic that was clearly not good for his reputation and his die-hard fans, you know, the boys from Compton or South Chicago or Harlem. Those boys that will slap anyone who just glance over at them. Poor ASAP Rocky, didn’t know what to say or how to say it, he just blurted out what comes to him naturally….

“A$AP Ferg’s Trap Lord album is in stores right now!” said Rocky. “The next artist stands up for everybody being equal—color, homosexuality” he added, pointing to Collins….”

Mr. Producer…next time give the guy a script for christ sake. Don’t leave him out to the wolves. Poor guy has to live with that reputation for life . SMH…the cost of money and promotion.

There were some saving graces however and from the audience reaction they too appreciated class Bruno Mars, probably the best performer of the night, Macklemore performing ‘Same Love” and Jennifer Hudson joined Mary Lambert on the same song. There were flashes of brilliance but in the environment of filth it got lost from the stench of MTV’s presentation of modern-day pop culture. The show ended thank God with Kate Perry performing the hit from the latest soundtrack from the new Rocky movie “Roar”. At that point my stomach was the only thing roaring for food, food .

Pop culture is in trouble. Last night was a reflection of the social change in the society, albeit MTV being American pop culture. Sadly it filters through out the world and our kids believe that this is quality. As parents you can only do so much. Hopefully you will not loose them to the abyss of the MTV generation dark hole. But last night it was all about marketing, supply and demand and consumerism. Thankfully for me the remote was my little friend. I am saved. But the thought that your kids will grow up in a world where pop culture no longer craves the angels of music but rather the demons, vampires and the dead, it is enough to make you call up your subscriber and say …remove MTV from my subscription.

Most of us exist in this space called Earth. We know we were born . We celebrate the day as our ‘birthday’ and we evolve over time , every year doing the same thing. But if you ask some people WHY they are born, they might probably give you a generic answer..’I was born to have a family and kids and have a good life…” Thats it .

To the average man that is enough. But I challenge you to think that we are all here for a specific reason. Every one of the billion persons in humanity is here for a reason. When you find that reason, that is the day you will understand WHY you are here. Some take a lifetime while others discover over a shorter period. Regardless of time- strength to you if you discovered your truth. Hope for those who haven’t.

“AKWANTU” is the documentary of a special set of Jamaicans whose triumphs have been drowned in the noise of history. The story tells of the historic victory of a set of slaves ,at the time less than 50, over the mighty British Army in Jamaica to gain their freedom. They were called the Maroons.

A British governor signed a treaty promising them 2,500 acres in two locations, because they presented a threat to the British.

Beginning in the late 17th century, Jamaican Maroons fought British colonists to a draw and eventually signed treaties in the 18th century that effectively freed them over 50 years before the abolition of the slave trade in 1807.

To this day, the Jamaican Maroons are to a significant extent autonomous and separate from Jamaican society. The physical isolation used to their advantage by their ancestors has today led to their communities remaining among the most inaccessible on the island. In their largest town, Accompong, in the parish of St. Elizabeth, the Leeward Maroons still possess a vibrant community of about 600. Tours of the village are offered to foreigners and a large festival is put on every January 6 to commemorate the signing of the peace treaty with the British after the First Maroon War.

It is a fascinating story of the Jamaican Maroons and their victory. They could only accomplish this through UNITY -nothing else. Its a pity we have not learned anything from history except that where there is no unity there is no strength.

We will keep you posted on this story but for now educate yourself on this historic group of people- the Maroons of Jamaica.